Dr. Hall works 45 to 60 hours a week. He gets up before 7 AM and home after 6 PM and those are his short days. By the time he gets home the girls are usually fed and bathed and sometimes already in the bed. Our bed time here at the Hall house is 7:30 PM. I personally think that is perfect. That gives me about two and a half hours after they are down to tie up lose ends and take a break and still get enough sleep to recharge for the next day.

For a long time those two and a half hours were spent with Doc, catching up, hanging out, making out, whatever we wanted to do with that time. ;) Now that time is spent with me on the computer and Shawn on the lawn mower. I am not kidding you, it is 8:15 PM and he is outside with the headlight on the Huskee mowing the grass.

Now in all fairness I have to tell you that we rent a house on 5 acres and we are responsible for 2 of them. We agreed to this upfront when we rented the house. However, once lawn care season began we quickly realized that neither Shawn nor myself knew how big 2 acres was. You may laugh, but I ask you, do YOU know how big 2 acres is?

It is clear that Shawn and I did not grow up on a farm or for that matter even on a large yard. That was made even clearer by the fact that the only lawn mower we had when we rented the house was a 7 year old PUSH mower.

Quickly we realized that we had two choices and two choices only: 1) We could pay someone to keep the grass cut or 2) We could buy a lawn mower. So, we priced both and what we learned was that the going rate to cut 2 acres of grass in Franklin TN is $65. I know what you are thinking, $65 twice a month...it may be worth it just to save the time. I thought the same thing. Then we realized that the people on our street cut their grass twice a WEEK. Seriously, do the math, $65 times 2 is $130 a week for lawn care at a house that we do not even own. I think NOT. So I went out and I bought a brand new 46 inch Huskee riding mower aka "the other woman". 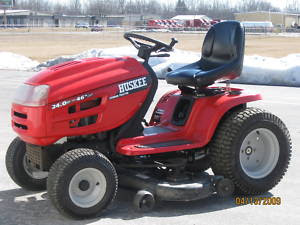 This is when the saying "time is money" applies at my house. Had I known that Doc would be spending his evenings with "the other woman" over the next three months rather than with me, I can assure you that I would have justified the $130 a week. But my friends, it is too late, she has consumed him and I am no match for her. So as he continues his love affair with she who will not be named, I will be with you sharing my day over a cup of hot chocolate and watching what decent TV I can find on the four channels available to me. Yes, I said 4 channels. That is a story for another day.
Posted by Melyshea at 8:03 PM

Email ThisBlogThis!Share to TwitterShare to FacebookShare to Pinterest
Labels: The honeymoon period.